April may be over, but showers are still happening! Just the hot kind, that wake you up in the morning, and hopefully not the miserable kind that ruin your hair on a night out!

I can’t function without standing under the shower, and I love anything that smells great to wake me up. But, because of my palmoplantar psoriasis, I have to be careful what I use.

I have settled in the last few years on a bar of soap  – Tomato Soap – by Nesti Dante. I love the stuff. It smells quite odd, but absolutely delicious, and it is kind to my skin.

However, I couldn’t resist giving this new product  – the L’Occitane Almond Shower Shake – a go, when it was sent to me to try.

L’Occitane’s Almond range is rich and nourishing to the skin, made with almond oil and almond milk from Provence. 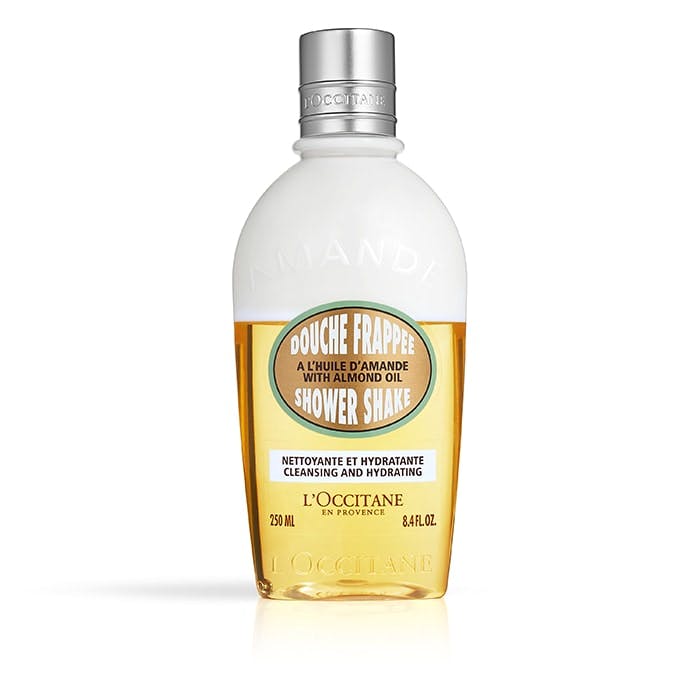 This new bi-phase shower oil consists of two different textures that become one when mixed together – and the mix is the shake! The bottle has little steel balls in it that mix the two phases togerther, and make a satisying shaker sound effect!

The product is super-softening, smells delicious, and leaves your skin feeling clean and silky. It’snot a bargain way to start the day – it’s £19.50 for 250ml, but a little goes a long way. I pay £6 for my soap bar, and it doesn’t last that long with one or two showers a day, with two in the house.

If you like a little luxury in the morning, then you can’t go wrong with this.

And the L’Occitane almond story is a really interesting one. In 1956, an exceptionally harsh winter ravaged the French countryside, including the region of Provence, and many almond trees were unable to survive. In the end, they were abandoned to make way for more profitable crops.

The Jaubert brothers – lavender growers on the Valensole plateau – were unwilling to see the trees left to this fate. Keen to bring back the landscapes of their childhood, they wanted to reintroduce almond trees to Provence. After leaving the region to gain valuable experience and learn new sorting and crushing techniques, they returned,  and since 2002, have planted 20,000 trees.

L’Occitane has a long term sustainability commitment with almond producers from South of France, utilising their broken nuts, which cannot be used in confectionery but are still bursting with benefits.

Alcoholic Jellies - and some LOVEly 5pm deals for Valentine's Day

I love gummy bears – but now I love alcoholic gummies even more – thanks to Smith & Sinclair, who sent me a fab box of them to try. Called The Party Selection, there’s Elderflower Spritz, Passion Fruit Mojito, Pineapple Bellini and Mandarin (Aperol-style) spritz. They’re all made with premium spirits...
Merle Brown
February 12, 2020

The January Blues might already be upon you – but I say try to fight them with a little bit of the January BEAUTY blues. I’ve rounded up a whole load of beautiful blue beauty products so if you are feeling down, have a good pour over these instead, and pop them on your payday list if you want properly...
Merle Brown
January 16, 2020