Was it last year I shared Olverum Bath Oil with you? It’s lovely stuff, a high-end brand, with gorgeous packaging, and I just don’t have a bathroom that befits it.

But after major renovations over the last three months, the bathroom in our flat will just have to stay as it is for a wee while longer. But that doesn’t mean I can’t use the lovely stuff to brighten up the shabby showerroom, does it?!

Olverum the brand hasn’t launched a new product in over 80 years – and now they’re launching two at once The Body Oil, and The Dry Body Oil. 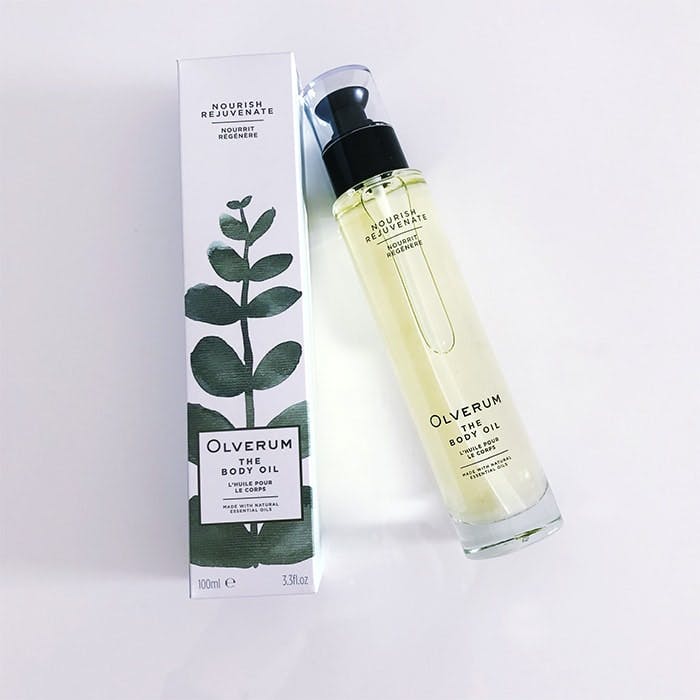 The brand, loved by royalty apparently, was created in 1931 by winemaker Franz Otto Klein and his wife Edith, an accomplished pharmacologist. Inspired by the therapeutic blends at their favourite spa in Baden Baden, Franz and Edith combined these with their professional expertise to create the definitive therapeutic oil.

The couple spent two years obsessively experimenting, until they finally arrived at a formulation they approved of.  They gave their creation to friends as Christmas presents and the response was great –  as word spread, the Olverum brand was born and the Kleins became among the earliest pioneers of green beauty. Eighty-seven years later, their closely-guarded recipe has earned its reputation as a cult beauty classic.

The brand is now in the careful hands of Dominic Hawksley, who has taken his time with new products.

“When your first product is near perfection, it’s daunting to embark on developing your second. Over the past four years, we have tested iteration after iteration until we arrived at formulations we believe are worthy of the Olverum brand. The fruits of our endeavours are two innovative body oils – simply called The Body Oil and The Dry Body Oil,” he explains.

I’ve been trying out The Body Oil, which is best used, as ever, on damp skin, but even on dry skin it disappears with no oily residue, and moisturises intensely. It has a lovely aroma, thanks to over 30 essential and cold-pressed botanical oils, including antioxiodant-rich raspberry seed oil, and Alaria esculenta extract, which is known to boost the synthesis of collagen, helping with the skin’s elasticity.

It’s not just our faces that need a little help with collagen. Trust me, everything starts to feel less firm in middle-age. Your body needs all the help it can get, and it’s best not to leave it too late.

It also contains lavender flower oil (to de-stress), sandalwood and frankincense oils (to soothe), and bergamot and geranium flower oils (to reinvigorate).

Bodycare is such a pain though, isn’t it? I just want to get showered, get dressed and eat my breakfast. And once I’ve settled into the sofa for the night, I don’t want to go through a bodycare routine. But you really should, and this makes it relatively easy – and pleasant – if you just remember to do it when you step out the shower or bath.

The only issue I have is the glass bottle. I know that it’s much more eco-friendly, but it means I can’t take it into the shower with me, for fear of knocking it over.

So, all I have been doing of late is keeping it as near to the shower as I can, reaching out for it, massaging it unto the problem areas – knees and elbows mainly – and then popping it back on the shelf.

In the evening I like to apply some to arms and legs before bed, and do as Olverum suggest – cup your hands around yoor nose and mouth after application and breathe deeply.

Olverum The Body Oil, £40, and The Dry Body Oil, £36, are available now at Liberty beauty, and olverum.com

Alcoholic Jellies - and some LOVEly 5pm deals for Valentine's Day

I love gummy bears – but now I love alcoholic gummies even more – thanks to Smith & Sinclair, who sent me a fab box of them to try. Called The Party Selection, there’s Elderflower Spritz, Passion Fruit Mojito, Pineapple Bellini and Mandarin (Aperol-style) spritz. They’re all made with premium spirits...
Merle Brown
February 12, 2020

The January Blues might already be upon you – but I say try to fight them with a little bit of the January BEAUTY blues. I’ve rounded up a whole load of beautiful blue beauty products so if you are feeling down, have a good pour over these instead, and pop them on your payday list if you want properly...
Merle Brown
January 16, 2020