It’s no surprise that Christmas is the busiest time of the year for fragrance sales – around £550m of them! Every year my dad would buy my mum her favourite scent, and he would be one of the thousands doing this for their loved ones.

It’s an easy gift, but it’s also a lovely gift. I adore fragrance. It’s one of the highlights of my job, being gifted gorgeous scents, but I do still seek out my favourites, and Clinique Aromatics Elixir is one of mine.

Sales of premium fragrance are up four per cent on last Christmas and retailers are predicting a strong set of sales – beauty consumers spend nearly as much in the last quarter of the year on fragrance as they spent for the whole rest of the year.

Let’s have a look at the Top Ten.

Chanel is number one, but it’s not the brand’s classic No5 scent, but its little sister Chanel Coco Mademoiselle that takes the top spot in the list- and is predicted to make around £26.4m this Christmas with around 390,720 bottles sold. Coco Mademoiselle, launched back in 2001,  is an oriental floral fragrance with top notes of orange, mandarin orange, orange blossom and bergamot. The middle notes are mimosa, jasmine, Turkish rose, and ylang-ylang, while the base notes are tonka bean, patchouli, opoponax, vanilla, vetiver, and white musk.

In second place is new fragrance YSL Libre which was launched this year with British singer Dua Lipa. The launch video has nearly 2m views on YouTube. Sales in the past couple of months have been phenomenal for a new fragrance and the new YSL scent is predicted to make around £14.3m with 215,800 bottles sold. It’s an oriental Fougere fragrance, with top notes of mandarin oil, petitgrain oil, lavandine France oil, and a blackcurrant accord. In the heart, are notes of lavender oil, jasmine sambac absolute, jasmine grandiflorum India absolute, and orange flower absolute, while the base includes vanilla extract Madagascar, cedarwood oil, ambergris accord and musk.

She might be 98-years-old, but Chanel No.5 is still in the top three. According to Chanel the formula used to produce No 5 has changed little since its creation.  The top notes are bergamot, lemon, neroli and ylang-ylang. The heart is jasmine, rose, lily of the valley, and iris, while the base is vetiver, sandalwood, vanilla, amber and patchouli.

Natalie Portman has been the face of Miss Dior since 2017, and she will help sell an estimated 137,300 bottles this Christmas. Wow. Did you know this fragrance was renamed in 2012? It was originally called Miss Dior Cherie when it launched in 2005. The scent is a chypre and is characterised by Italian mandarin and blood orange top notes, a Grasse rose and lily of the valley heart, and patchouli base. Gorgeous.

Another new scent for 2019, Lancome Idole, is fronted by American singer and actress Zendaya Coleman, star of Spider-Man: Homecoming and Spider-Man: Far from Home. The fragrance is expected to gross £7.7m in the last quarter of the year selling around 130,700 bottles. It’s a modern chypre floral fragrance, with top notes of bergamot essence, heart notes of rose essence, rose absolute, rose water and jasmine. The base notes are patchouli essence, cedar essence and vanilla extract. 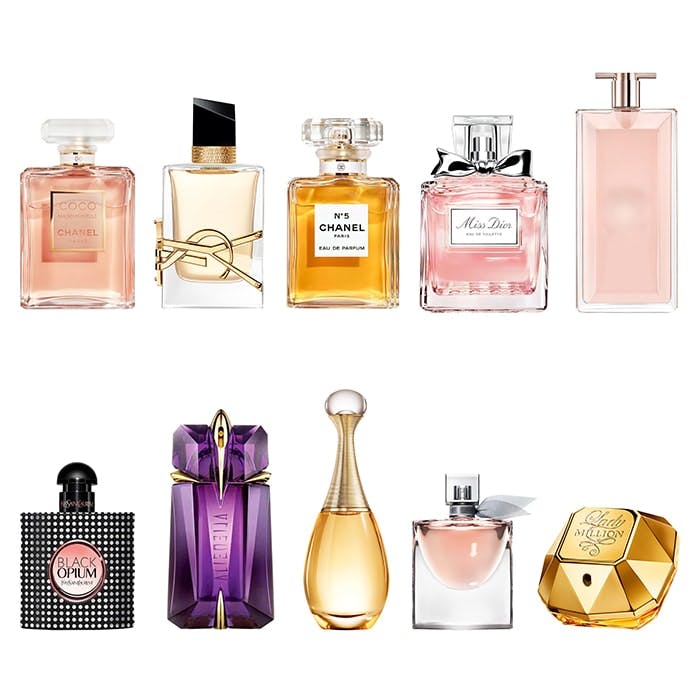 YSL Black Opium is predicted to have sold 121,600 bottles from October to December this year. It’s a  2014 re-interpretation of the classic YSL Opium perfume from the 1970s.
Black Opium is a dark and mysterious fragrance with a black coffee accord, mandarin and bergamot as the top notes. In the heart are notes of orange blossom, tuberose and Sambac jasmine, while the base contains white musk, vanilla beans and cashmeran.

First launched in 2005 with the iconic purple bottle in the shape of a talisman, this fragrance is still hugely successful. The fragrance is composed of mandarin essence, Moroccan jasmine, white amber and cashmeran wood and is number seven this year.

Charlize Theron has fronted the ad campaign for the last 15 years for 1999 scent, J’Adore. This is one of my mum’s favourites. It’s a sweet but balmy, slightly sharp floral scent with a yellow Italian Mandarin opening, damask rose heart and neroli essence base.

The ninth favourite is Lancome’s scent La Vie est Belle, which has been fronted by Hollywood actress Julia Roberts since 2018. Sales are predicted to be around £6.71m this festive season. Did you know this fragrance was launched in 2012 after three years in formulation?! Iris is the keynote of the perfume surrounded by orange blossom and jasmine at the heart. There are top notes of blackcurrant and pear, and a base of tonka bean, praline, patchouli and vanilla.

Released in 2010, two years after the successful men’s fragrance 1 Million, Lady Million is composed of fresh floral and woody accords. Bitter orange, raspberry and neroli are the top notes, orange blossom and Arabian jasmine are in the heart, while patchouli, honey and amber make up the base.