Elizabeth Arden does the 1970s

The 1970s is a BIG fashion trend this summer – think flared jeans, smock tops and macrame bags. And with that 1970s style, you need to have 1970s makeup. So, this is Elizabeth Arden’s guide to how to achieve the look of the decade.

The 1970s makeup moved on from the dark eyes and pale lips of the 1970s, and with all the hippy vibes, became more natural. But, there was still a big trend for metallics, thanks to the disco movement of the time.

Farrah Fawcett was the star of the day, and her flicks and sunkissed skin represent the decade perfectly. Other style icons from the 1970s include Bianca Jagger and Jerry Hall (Mick Jagger had taste!). And the stunning Lauren Hutton oozed ’70s style and natural beauty. 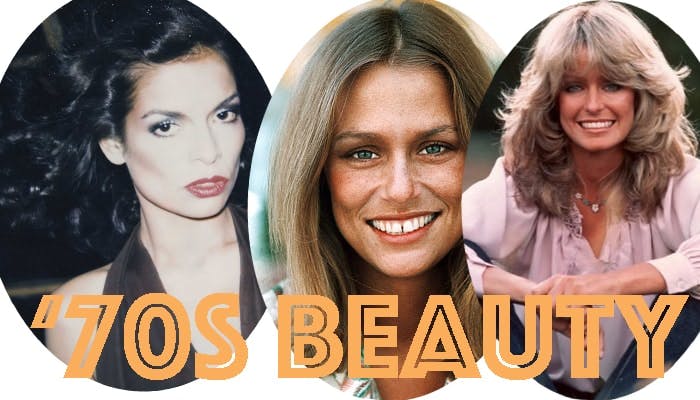 If you want to try to recreate a 1970s look this weekend, then here’s how, Elizabeth Arden style.

Elizabeth Arden was a brand at the forefront of skincare and beauty innovations since the 1930s, and in the 1970s they created some brilliant products and looks.

And their products today can still create those 1970s staples – glossy lips, metallic eyes, fresh faces, and that sunkissed glow.

Let’s start with the lips – the natural, barely glossed look was huge, but bold colours were represented in the disco era too. Corals works perfectly with this 1970s look. Elizabeth Arden’s Colour Moisturizing Lipstick Matte Finish Extension in Coral Crush is fab (£21).

For that Farrah Fawcett sunkissed skin. bronzers and pearlescent highlighters were huge in the ’70s. The more shimmer, and glimmer the better. So, try Arden’s Sunkissed Pearls Bronzer and Highlighter (£28).

Eyes were predominantly blue, but more often than that, metallic. There are a load of metallic eyes coming this summer. Elizabeth Arden’s Sunkissed Pearls Cream Eye Shadow Stylo (£19) comes in three fab shades – Blue, Bronze and Freshwater Pearl. So easy to use as well – just slick them all over the lids. 1970s eye makeup wasn’t always that carefully applied!

Brows like Bianca Jagger’s were perfectly arched, and quite natural – not too thin. Create your version with Elizabeth Arden’s Beautiful Color Natural Eye Brow Pencil in Brownette (£17). So easy to use, with a brush at one end.

Now, Elizabeth Arden’s fantastic cult beauty product, Eight Hour Cream (£26), has to be in this 1970s look somewhere, right? I love this stuff. It soothes my psoriasis wonderfully, it’s a holiday staple of mine, and use it cleverly and you can achieve the healthy glowing skin that was embraced by all in the 1970s. Highlight your facial features rather than focusing on foundation. So, use it, albeit sparingly, to highlight cheekbones, and just add that dewy look to your complexion.

Finally, in the 1970s we moved away from he thick cake, and clumping mascaras of the 1960s. Gone were the Twiggy style doll-eyes, and instead, a sweep of clump and flake-free mascaras which exposed healthy, long lashes was the look you wanted. Recreate this with Beautiful Color Lash Enhancing Mascara (£22).

What are your favourite products for a 1970s look?