Here at 5pm Health & Beauty, we like to think we are very good to you. With discounts on beauty treatments at spas and salons across Scotland, as well as fabulous competitions, thanks to us you don’t need to spend a fortune to look and feel amazing.

Yes, we are very good to you indeed. But with our latest competition, we have well and truly surpassed our previous generosity. Are you ready for this? Take a deep breath. Our latest prize is….. 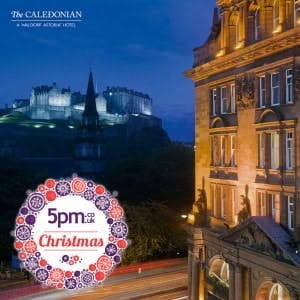 Why is this prize extra special? Here are the reasons:

* The Caledonian is the ONLY Waldorf Astoria hotel in the UK.

* Its Guerlain Spa was recently voted by Stylist magazine as one of the top spas in the UK.

* The “Caley” originally opened as a luxury hotel in 1903 and quickly became popular with the rich and famous, hosting Charlie Chaplin, Gene Kelly (who danced on the hotel’s sweeping staircase), Laurel and Hardly, Elizabeth Taylor and Bing Crosby. It re opened last year following a £24 million renovation

* Its restaurants are overseen by Michelin starred chefs Chris and Jeff Galvin, who own a number of ventures including Galvin at Windows in the London Hilton on park Lane and Galvin Demoiselle overlooking the famous food hall in Harrods. Considered to be among the best chefs in the UK these guys are a BIG DEAL.

* It has bigger bathrooms than any hotel in Edinburgh.

For more information on the Caley’s restaurants, head over to our Food & Dining Blog. As you’re on our Health & Beauty blog we guess you are desperate to know all about the hotel’s spa so let us fill on in on the luxurious details.

Founded in 1828, Guerlain is the oldest beauty house in the world. They are so upscale they don’t open spas just anywhere – Edinburgh’s is the only one in the UK and there are only three in Europe (Berlin and Prague are the other two locations).

The spa is inspired by Guerlain’s original beauty rooms opened in the Champs Elysees in 1939 and its design is the epitome of luxury. Our Beauty Blogger Merle Brown visited earlier this year and confirmed its bathrobes are “ridiculously comfy.”

The lucky winner of our competition will not only have use of the spa facilities but will be treated to the Caledonian Chic massage – the spa’s signature massage which is inspired by Scottish history and culture.

The massage teachers who came from Paris to train the staff at The Caledonian encouraged them to create a massage of their own. The result was the Caledonian Chic, with movements based on the Saltire flag – a criss crossing of the masseuse’s hands – as well as a gentle criss crossing inspired by tartan, a volcano which builds up and erupts along the spine based on Edinburgh’s Castle Rock and Scottish rain – gentle tiny strokes.

With a prize this amazing, it’s fair to say a lot of people will enter our competition. But one winner does to be picked. So give yourself a chance and enter here.

The competition closes at midday on Christmas Eve.